On the 28th March, 1941, Virginia Woolf left her house in Rodmell Sussex and drowned herself in the river Ouse just a short walk from her garden. She left two suicide notes behind, one for her husband Leonard and one for her sister Vanessa. She was 59 years old and had just finished her last novel Between the Acts which was published after her death. 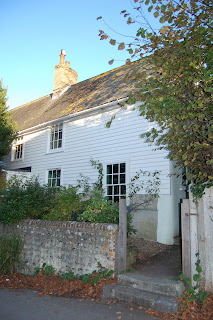 Last summer I walked from Rodmell, along the river Ouse and over the South Downs to Charleston Farmhouse, the house that Virginia's sister Vanessa lived in. It is a walk Virginia would have done many times herself and I thought a lot about how last journey to the river and her decision to end her life. You can't quite see the river in this picture at the bottom of the downs. 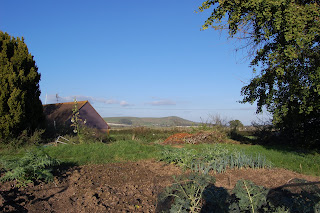 There has been a lot of discussion about Virginia Woolf's suicide and I feel sometimes that her "moods" and suicide somewhat dominate the perception of her and her writing so I wont dwell on this any longer, I just took moment to think about it with today being 28th March.
Posted by Flo at 22:39