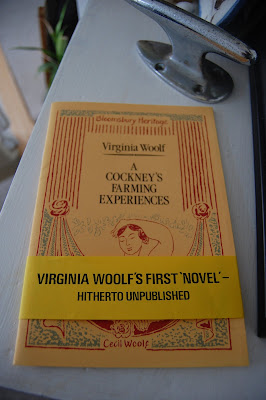 I recently discovered the Bloomsbury Heritage Series, which is a series of short booklets about all things Bloomsbury and the people that were part of this group. It was set up by Leonard Woolf’s nephew Cecil Woolf and it is a really delightful collection of books. The series is published very much in the spirit of the Hogarth Press, each book is bound in card and the front cover has a design similar to those that Vanessa Bell designed for The Hogarth Press.

The idea of the series is to bring together pieces of writing about and around the Bloomsbury group. It explores all aspects of their lives and has many contributors. There is something very charming about them and I love that you send off for them by post, It is a real pleasure to wait for it to arrive through the letter box, the anticipation, something that we have lost in the age of the internet, download it now, next day delivery. Mr Woolf is a real character too, and he recently attended the International Virginia Woolf Conference in New York, coverage of this can be seen here and here -Thank you to Blogging Woolf for the links.

I had ordered a catalogue by e-mail and was pleasantly surprised when I had a reply from Cecil Woolf to say that it was in the post. When I placed my order for the first book in the series ‘A Cockney’s Farming Experiences’ I had read that Mr. Woolf would be attending the annual Virginia Woolf conference so I did not expect an immediate response. About a week later I received another e-mail apologising for the delay in sending out my order, it was a lovely touch and by far the best customer service I have received in a long time.

‘A Cockney’s Farming Experiences’ which is “Virginia Woolf’s first ‘novel’ - Hitherto Unpublished” as pronounced on the front cover, was written when she was just ten years old. Virginia Woolf decided at a very early age that she would be a writer and from that point onwards she was always writing, early attempts at stories, the Hyde Park Gate News, with her siblings, diary entries, fiction, critical essays - she was always writing.

The book itself is a delight to read and you sometimes forget that it was written by a child, as some of the language is quite sophisticated and yet at other times it is very childlike. It is difficult to know how much of this is due to the different use of language (this was, after all, written 110 years ago) and how much is down to Virginia being a very bright and capable child. Despite what she felt in later life about her education, compared to many of today’s ten year olds her education was very broad and thorough.

The introduction, written by Suzanne Henig is very informative about Virginia Woolf and her siblings early writings as well as making comparisons to Woolf’s later works. This seems a little unfair, (how many of us would want to be judge on our achievements aged ten?) but at the same time fascinating to see the seeds of ideas which would go on to become ground breaking novels.

The book itself is actually two stories, both a only a few chapters long. ‘A Cockney’s Farming Experiences’ tells the story of a Cockney and his wife who decide to buy a farm in Buckinghamshire. They don’t know anything about farming but “we were then lately married and very energetic and hopeful” (P15) The story tells of the various trials and tribulations that the Cockney farmer faces, but it all turns out right in the end when he inherits “ a jolly lot of money” (P 20) from an Aunt who has just died.

The second story is a sequel entitled “The Experiences of a Pater-familias (A sequel to A Cockney’s Farming Experiences.) which takes place three years later and is about the arrival of the farmer’s son Alphonso, who he dislikes and is rather jealous of.

“I got a blowing-up from Harriet for half an hour afterwards as I had burnt the toast to a cinder.” (P16)

The poor farmer never seems to be able to do anything right!

I have really enjoyed reading this first attempt by Virginia Woolf at writing a novel, it certainly gives you an insight into what she might have been like as a child. The story was started by both Thoby and Virginia, but Suzanne Henig has suggested that Thoby quickly got bored and that the story was completed by Virginia alone.

I have also got the second book in the Bloomsbury Heritage series, ‘Roger Fry: A Series of Impressions’ which was written by Virginia about her great friend Roger Fry after he died in 1934. I shall be returning to this later on.
Posted by Flo at 23:45